A year ago today (June 12, 2016), an armed individual assaulted partygoers in the popular Orlando LGBTQ+ nightclub, Pulse, during Latin Night. In the worst mass shooting in US history and the deadliest single act of violence against LGBTQ+ people, the perpetrator robbed 49 human beings – the majority of them Latinx – of the joy, suffering, perfection, and imperfection of their existence. Dozens more were injured during the attack.

At the time, I was flying back home to the UK, blissfully unaware of this act of hate and brutality against the LGBTQ+ community. After I went through passport checks, I took my phone off plane mode and immediately, it displayed dozens of notifications and news alerts. Instantly stopped in my tracks by the enormity of what these revealed, I was short-winded due to the crushing nature of the flow of emotions pouring into my body: helplessness and anger and soon thereafter something else… a nagging feeling that bingeing on every last detail that emerged, though a millennial’s natural reaction, was probably not healthy.

More than “not healthy” I knew that the whole media spectacle was not a fitting tribute to the victims and their families (biological or of-choice); that footage of wounded bodies playing in a loop was possibly only contributing to the normalization of such images and the dehumanization of the injured; that consuming every last gruesome detail of the fatal chain of events was doing nothing more than feeding the hyper-crass monstrosity characteristic of too many media outlets today. But for every one of these and other arguments against my being under the media spell, counterarguments formed in my head: queer and Latinx erasure are painfully dangerous everyday realities and silencing the details would only allow non-queer/white people to remain comfortable in their own ignorance of the life-threatening situations many queer folk/POC find themselves in – even in more “progressive” cultures. Proof of this was the whitewashed coverage of the tragedy as denounced by Steven W Thrasher.

Inconsolably, I oscillated between turning my phone off and frantically turning it back on to search for the latest developments. Irremediably, every time I rested my eyes, the wounded appeared superimposed on every image; every time I tried to put them out of my mind, I could see them out of the corner of my eye. It was then that I did something I hadn’t done since my Holy Communion: I fell on my knees and I prayed, the way my grandmother showed me: Padre nuestro que estás en los cielos, santificado sea tu nombre…

I did this not because I believed in it but because there was nothing else for me to do at the time and I had hoped it would bring me a sliver of the consolation and reassurance I knew it brought my grandmother daily. Though mildly soothing at first, I still could not deal with the inner conflict caused by the presence of opposing emotions. Additionally, I became angry at myself – thinking ‘how dare you make this pain yours?!’ – and wondered if I was somehow appropriating others’ personal grief. It then struck me that actually, this was in a way personal to all of us queer people who have known numerous permutations of discrimination. The Orlando Pulse tragedy acted as a painful reminder to the community that vicious and oftentimes fatal queerphobic hate is simmering away under the surface of even the more “tolerant” of places.

As we commemorate the first anniversary of the Pulse attack, with queer communities in the US living under the constant threat of one of the most horrifyingly homophobic/transphobic administrations (one that is dismantling already fragile LGBTQ+ recognition and rights) a dystopian novelist could conjure up, I want to share what I wrote back in June 14, 2016: my tribute poem to the Orlando Pulse victims, a celebration in verse, with love and in hope. 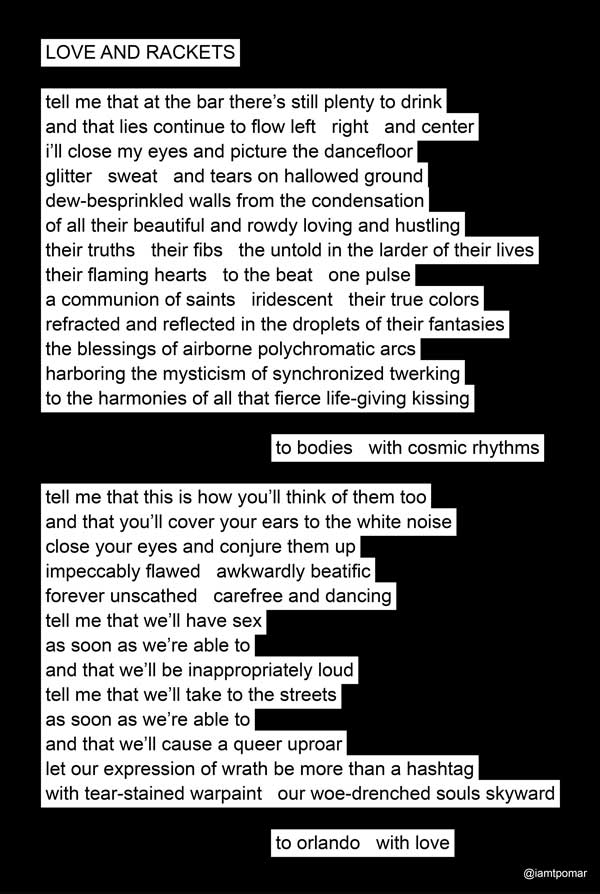 If you wish to show your support, please consider an act of kindness and love, on Orlando United Day and/or a donation to the onePULSE Foundation.